Extraordinary designer of automotive and everything else... Count De Sakhnoffsky. Emphasis on the LaBatt's streamliner 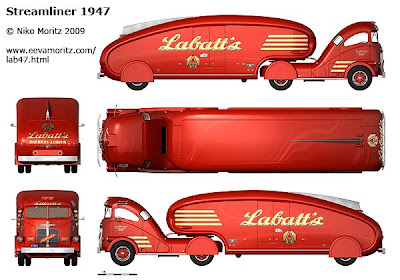 the above 3 are via: http://www.eevamoritz.com/lab47.html 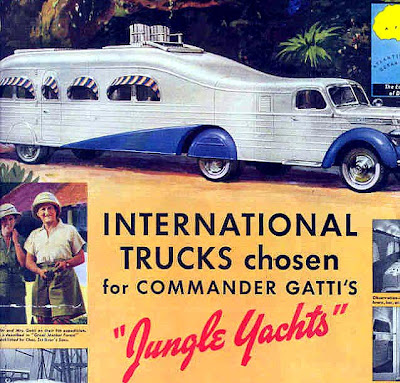 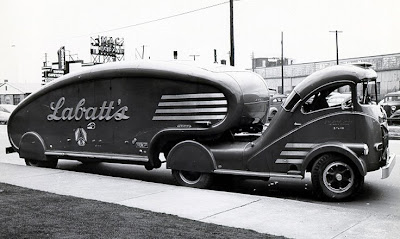 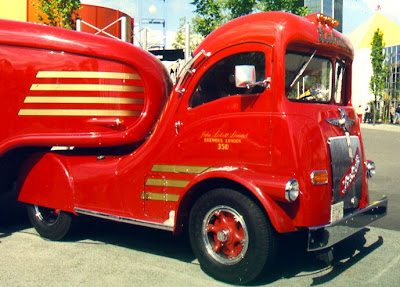 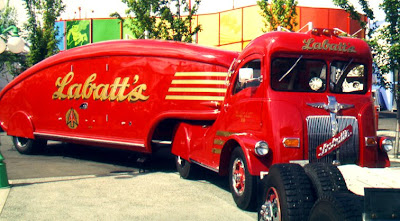 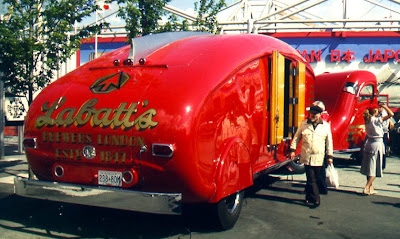 He was amazing in automotive design work.... having designed for Austin, Bantam, Cord, Auburn, Packard, the '33 Nash, the '34 LaSalle, the 1935 Chrysler Airflow, the 1937 D-35 Jungle Caravan, and notably, the 1934 12cyl Packard 1108 Sport Phaeton (for LeBarron), said to be one of the most beautiful designs of an American coachbuilder.... however he may be most easily remembered and revered for the design of the LeBlatt's Beer trucks. Beer and alcohol advertising in post prohibition was hghly restricted in Canada and the Labatts Company needed public attention so they commissioned him to conceive a tractor-trailer that would both haul huge loads efficiently and serve as an instantly recognizable travelling billboard, and with customized "cab over engine" White Motor Company tractors pulling brilliant red and gold streamliner trailers. Vicktor Schreckengost (who replaced him at Murray Ohio Bicycles) assisted him in the design of the first-cab-over-engine truck for Cleveland's White Motor Company.


There is reference to his design of furniture, and interior home elements like radios. He also had been the chief bicycle designer for Murray-Ohio prior to 1938. He was perhaps the greatest pedal car designer of all time... in 1937, Steelcraft, the Cleveland-based pedal car division of the Murray Ohio Manufacturing Co claimed as much anyway, and he was the winner of the Grand Prix at Monte Carlo for six consecutive years in the Elegance Contest for his "juvenile automobile" designs. His 2nd version for LaBatt, produced in 1936, was the winner of the ‘Best Design’ award at the New York World’s Fair in 1939.


Esquire magazine, in 1934 hired de Sakhnoffsky to become the technical and mechanical editor. The magazine immediately became a showcase for Sakhnoffsky’s design concepts of cars, trucks, boats, bathtubs, movie theatres with alternating seats for more legroom http://www.lepoix.de/html/reference/sakhnoffsky_streamine_design/inner_circle_streamline_architecture.htm , a swimming pool with rubber escalators, executive desks, and an air-conditioned jungle caravan. Joining the US Army in WWII he rose to the rank of Lt. Col. at war's end.