For the next 8 minutes you will hear a race car and squealing tires. Called the "Most radical car movie of all time" 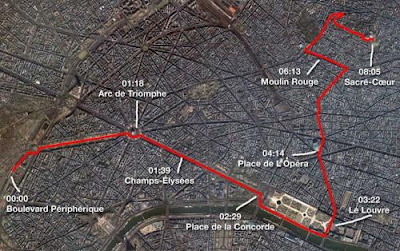 You will see 1978 street racing, and about 2 dozen ignored red lights, one forced sidewalk jaunt, 2 wrong ways against traffic, and 4 "nearly missed the turn". But not one spin out or fish tail.

I couldn't find a larger version, but the perspective of a bumper mounted camera speeding through mostly empty Paris city streets is phenomenal! The white lines just zip past the camera, and the engine roars up through the gears constantly. Better than any hollywood chase scene.

If you want you can operate the google maps feature to follow the car on a map, but it ain't worth it. Just glue your eyeballs to the movie.

For a COMPLETE write up, links about, photos of the cars involved, a mapped out route of the film, etc etc go to http://www.darkroastedblend.com/2007/11/most-radical-car-movie-of-all-time.html

Claude Lelouch drove his own "Mercedes" with the camera attached to its front bumper, reaching speeds of 150 km/h (this page gives a speed breakdown) - but then the ride was repeated a week later on Ferrari to use the sound of its engine for soundtrack.
at Wednesday, July 18, 2007