extreme lightweight, plus other cool ideas 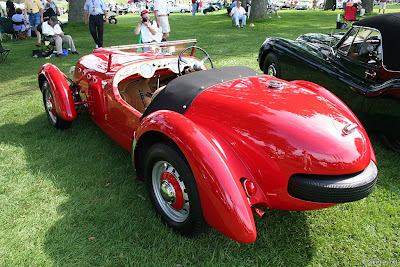 Healey Silverstone 1949-1950
After its first mass-produced car Westland, Elliot and Sportsmobile Healey decided to set up on the same chassis an easy and perfect sports car. It became the Silverstone, which not only successfully addressed the competitions, it became very attractive to collectors. The name was received after racing in the town Silverstone.

The gearbox was pushed back by 20 cm, it was fitted with a front stabilizer for lateral stability and upgraded witha stronger spring rear suspension. Lightweight and compact inswept body was achieved by using motorcycle fenders and a shorter windscreen, more weight was saved and aerodynamics enhanced by hiding the headlights behind the grill, and using the spare wheel in a special aperture at the rear of the body, which further served as a rear bumper. As such, Silverstone weighed nearly 200 kg less than the previous model from Healey, and has been very successful racing machine. 104 cars were made in '49 and 50.
http://www.motorbase.com/vehicle/by-id/715/
at Monday, July 23, 2007