the Babich Leningrad, with a limo engine, a lot of custom work, it had to be the best looking sports car in the late 1950's USSR 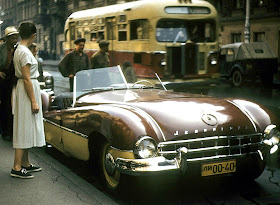 Thanks to Steve who sent this to me with the info about the car:

Seen here on Herzen street, this home-built two-seater sports car was designed and built by Neva A. Babich, a resident of Leningrad. The 3.5L engine was from a GAZ-12 ZIM, a Soviet limousine produced by the Gorky Automotive Plant from 1950 until 1960 that was inspired by the 1948 Cadillac Fleetwood 61 and 1947 Buick Super.

Not long after it was built, the Soviets placed severe restrictions on engine size in custom-built cars, not wanting ordinary citizens to have faster cars than the police/bureaucracy. This one could hit an honest 80 mph.

here is is recently