Seriously, You don't want this post, you want the JAN 2012 update: http://justacarguy.blogspot.com/2012/01/ron-pratte-collection-update-his.html 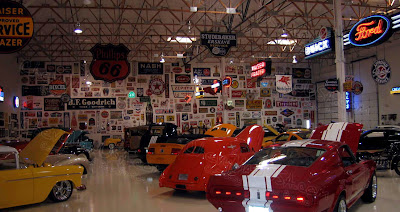 for the Jan 2012 update with a the video from inside Ron's collection, and screen shots: http://justacarguy.blogspot.com/2012/01/ron-pratte-collection-update-his.html

for the Jan 2010 update: http://justacarguy.blogspot.com/2010/01/update-to-ron-pratte-post-darryl-gwynn.html

Ron Pratte of Chandler, Arizona, multi-millionaire who sold Pratte Development, one of the nation’s largest wood framing and concrete foundation companies to Pulte Homes at the peak of the Arizona housing boom and cashed out just in time to avoid the slump. Known in the car world for the $5 million winning bid for Carroll Shelby’s 1966 Super Snake AC Cobra 800hp 427 dual quad, dual supercharged. http://justacarguy.blogspot.com/2007/01/carroll-shelbys-personal-cobra-sells.html

Ron is the brains behinds the Pratte Development Company, Inc., which builds one of the nations largest wood framing and concrete foundation companies. To top it off, he has his business located in one of the fastest growing areas of the country.

Most of the other car aficionados know Ron Pratte from his last years purchase of Futurliner bus (he brought it for over 4 million dollars), and he bought the first Shelby GT500 last year for nearly $650,000.
http://www.techbanyan.com/3221/ron-pratte-car-collection/
http://theronprattecarcollection.blogspot.com/

When Pulte Homes Inc. last month announced it has entered a 50/50 joint venture with its largest trade contractor in Arizona and Nevada, eyebrows went up across the American housing industry. A high percentage of them belonged to GIANT production builders who compete head to head with the Bloomfield Hills, Mich.-based colossus.

Philanthropic: Ron Pratt appears to have spent nearly as much on charity as on cars. In a single auction on the Tony Stewart race car, Ron Pratt increased his own bid to $300K, inspired others to throw in additional funding of $80K, had previously donated $100K independent of the BJ auction and helped to achieve another $20K from an auction for a couple of $20 posters.
And then? Donated the car back to the Gwynn Foundation that sold it to raise money a second time by selling it again at Barrett Jackson auction Jan 18th 2009. And it sold for 165 thousand to go directly to buy electric wheelchairs for kids.

Do the math. That’s $500K, yes 1/2 million, raised for the foundation that supports those afflicted for Muscular Dystrophy.
http://blog.hemmings.com/index.php/2007/01/22/who-is-ron-pratte/
Buying the 2006 Jeff Gordon Monte Carlo for $500,000. The proceeds go to the National Marrow Donor Program.

In February 2009, the Arizona Classisc Thunderbird Club may be touring the collection..... So look to their website after that to see if any of their members post photos or talk about the collection: http://clubs.hemmings.com/clubsites/actc/events.html