Salute of the day to Joy Lofthouse! 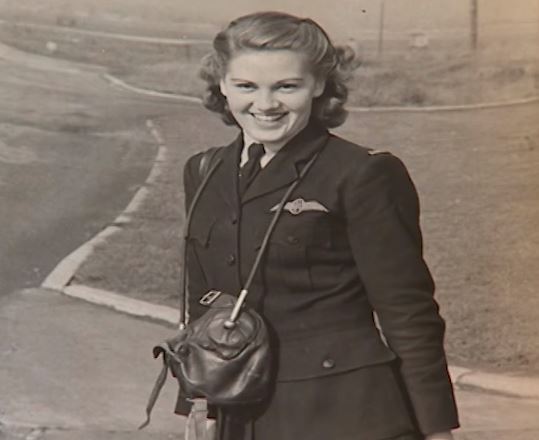 In 1943 Joy Lofthouse, a 20-year-old bank cashier, replied to an advertisement she had seen in the Aeroplane magazine. It was for women to train for the Air Transport Auxiliary (ATA), and although the competition was intense her application was successful. As a result she went on to become one of 164 female pilots during the second world war who were given the important job of ferrying military planes around the UK from one air base to another.

both Joy and her older sister, Yvonne, were dedicated to sport in general and to tennis in particular. Joy began working in the local Lloyds bank just as war broke out. But she had greater ambitions than to be a cashier, and sought inspiration in the pages of the Aeroplane magazine

When Joy applied to the ATA she had no idea that Yvonne had also put in an application, just before her. Both were successful and served together until the end of the war.

The pilots’ work expanded rapidly from the transport of medical supplies and personnel to ferrying fighters and bombers to bases around the country. For Lofthouse this meant a posting to Hamble, near Southampton, in 1944.

Alongside workaday aircraft she also flew more spectacular machines. There were Hawker Tempest Vs, North American Mustangs and Supermarine Spitfires, all 400mph fighters. She flew a total of 18 types of aircraft – relying on a map and the view out of the cockpit for navigation – but the Spitfire was her enduring favourite.

In 1946 EC Cheeseman’s book, Brief Glory: The Story of ATA, was published, listing, on page 230, “Third Officer Gough, Joyce, Miss”. But jobs for women pilots were then practically nonexistent, and she had to turn to other things.

After the war she married Jiri Hartman, a Czech Spitfire pilot whom she had first encountered while working at Lloyds. The marriage ended in divorce in 1966. Two years later, while training to become a teacher in Portsmouth, she met Charles Lofthouse, a former bomber pilot who had been held at Stalag Luft III prison camp in what is now Poland, where he had worked on preparations for the 1944 Great Escape. They married in 1971, by which time he was a headteacher and she was teaching children with special needs.

It was only towards the end of the 20th century that the scale of the achievement of women such as Lofthouse began to be appreciated. Throughout her life she retained her links with her former female comrades in the ATA and attended many reunions. In 1990 she met young women aspiring to be RAF pilots at Biggin Hill, and in 2008 she was a recipient of a commemorative badge for the Attagirls issued by the government. She was also a patron of the Fly2Help charity, which encourages young people to take up flying. In 2015, at Goodwood in Sussex, she took to the air in a (dual-control) Spitfire for the first time in 70 years.